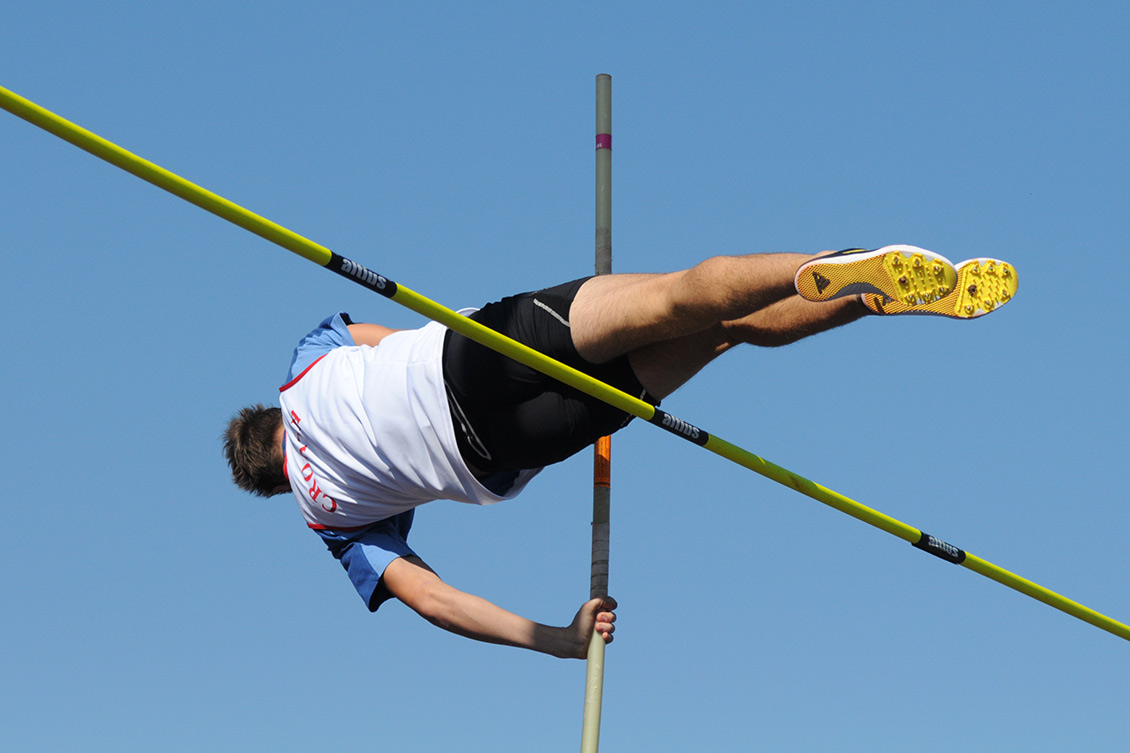 His palms were sweating. He needed a towel to dry his grip. A glass of ice water quenched his thirst but hardly cooled his intensity. The astroturf he sat on was not as hot as the competition he faced today at the national junior olympics. The pole was set at 17 feet. That was three inches higher than his personal best. Michael stone confronted the most challenging day of his pole-vaulting career.

The stands were still filled with about 20,000 people, even though the final race had ended an hour earlier. The pole vault is truly the glamour event of any track and field competition. It combines the grace of a gymnast with the strength of a body builder. It also has the element of flying, and the thought of flying as high as a two-story building is a mere fantasy to anyone watching such an event. Today and now, it is not only Michael Stone’s reality and dream — it is his quest.

As long as Michael could remember he had always dreamed of flying. Michael’s mother read him numerous stories about flying when he was growing up. Her stories were always ones that described the land from a bird’s-eye view. Her excitement and passion for details made Michael’s dreams full of color and beauty. Michael had this one recurring dream. He would be running down a country road. He could feel the rocks and chunks of dirt at his feet. As he raced down the golden-lined wheat fields, he would always outrun the locomotives passing by. It was at the exact moment he took a deep breath that he began to lift off the ground. He would begin soaring like an eagle.

When he took a deep breath, it happened. He began to fly. His take-off was effortless. Michael Stone was now flying, just like in his childhood dreams. Only this time he knew he wasn’t dreaming.

Where he flew would always coincide with his mother’s stories. Wherever he flew was with a keen eye for detail and the free spirit of his mother’s love. His dad, on the other hand, was not a dreamer. Bert Stone was a hard-core realist. He believed in hard work and sweat. His motto: “If you want something, work for it!”

From the age of 14, Michael did just that. He began a very careful and regimented weightlifting program. He worked out every other day with weights, with some kind of running work on alternate days. The program was carefully monitored by Michael’s coach, trainer and father. Michael’s dedication, determination and discipline was a coach’s dream. Besides being an honor student and only child, Michael Stone continued to help his parents with their farm chores. Michael’s persistence in striving for perfection was not only his obsession but his passion.

Mildred, Michael’s mother, wished he could relax a bit more and be that “free dreaming” little boy. On one occasion she attempted to talk to his father about this, but his dad quickly interrupted, smiled and said, “You want something, work for it!”

All of Michael’s vaults today seemed to be the reward for his hard work. If Michael stone was surprised, thrilled or arrogant about clearing the bar at 17 feet, you couldn’t tell. As soon as he landed on the inflated landing mat, and with the crowd on its feet, Michael immediately began preparing for his next attempt at flight. He seemed oblivious of the fact that he had just surpassed his personal best and that he was one of the two final competitors in the pole-vaulting event at the National Junior Olympics.

When Michael cleared the bar at 17 feet 2 inches and 17 feet 4 inches, he again showed no emotion. Constant preparation and determination were his vision. As he lay on his back and heard the crowd groan, he knew the other vaulter had missed the final jump. He knew it was time for his final jump. Since the other vaulter had fewer misses, Michael needed to clear this vault to win. A miss would get him second place. Nothing to be ashamed of, but Michael would not allow himself the thought of not winning first place.

He rolled over and did his ritual of three finger-tipped pushups along with three Marine-style pushups. He found his pole, stood and stepped on the runway that led to the most challenging event of his 17-year-old life.

What he didn’t know was that his dad was hugging his wife and crying. That’s right: Bert “If You Want It, Work For It” Stone was crying like a baby in his wife’s arms. He was crying harder than Mildred had ever seen before. She also knew he was crying the greatest tears of all: tears of pride.

The runway felt different this time. It startled him for a brief moment. Then it all hit him like a wet bale of hay. The bar was set at 8 inches higher than his personal best. That’s only one inch off the National record, he thought. The intensity of the moment filled his mind with anxiety. He began shaking the tension from his body. It wasn’t working. He became more tense. Why was this happening to him now, he thought. He began to get nervous. Afraid would be a more accurate description. What was he going to do? He had never experienced these feelings. Then out of nowhere, and from the deepest depths of his soul, he envisioned his mother. Why now? What was his mother doing in his thoughts at a time like this? It was simple. His mother always used to tell him when you felt tense, anxious or even scared, take deep breaths.

So he did. Along with shaking the tension out of his legs, he gently laid the pole at his feet. He began to stretch out his arms and upper body. The light breeze that was once there was now gone. He could feel a trickle of cold sweat running down his back. He carefully picked up his pole. He felt his heart pounding. He was sure the crowd did, too. When he heard the singing of some distant robins in flight, he knew it was his time to fly.

As he began sprinting down the runway, something felt wonderfully different, yet familiar.

The surface below him felt like the country road he used to dream about. The rocks and chunks of dirt, the visions of the golden wheat fields seemed to fill his thoughts. When he took a deep breath, it happened. He began to fly. His take-off was effortless. Michael Stone was now flying, just like in his childhood dreams. Only this time he knew he wasn’t dreaming. This was real. Everything seemed to moving in slow motion. The air around him was the purest and freshest he had ever sensed. Michael was soaring with the majesty of an eagle.

It was either the eruption of the people in the stands or the thump of his landing that brought Michael back to earth. On his back with that wonderful hot sun in his face, he knew that he could only envision the smile on his mother’s face. He knew his dad was probably smiling too, even laughing. Bert would always do that when he got excited, smile and then sort of giggle. What he didn’t know was that his dad was hugging his wife and crying. That’s right: Bert “If You Want It, Work For It” Stone was crying like a baby in his wife’s arms. He was crying harder than Mildred had ever seen before. She also knew he was crying the greatest tears of all: tears of pride. Michael was immediately swarmed with people hugging and congratulating him on the greatest achievement of his life. He later went on that day to clear 17 feet 6 1/2 inches: a National and International Junior Olympics record.

With all the media attention, endorsement possibilities and swarming herds of heartfelt congratulations, Michael’s life would never be the same. It wasn’t just because he won the National Junior Olympics and set a new world record. And it wasn’t because he had just increased his personal best by 9 1/2 inches.

It was simply because Michael Stone is blind.